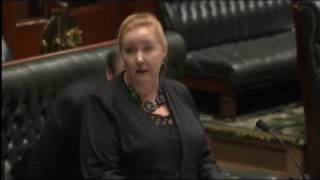 I speak in debate on the Crimes (Domestic and Personal Violence) Amendment (Review) Bill 2016 and note the contribution of the shadow Attorney General, and member for Liverpool, and others who have spoken in this debate. This bill implements a number of recommendations from the statutory review of chapter 9 of the Coroners Act 2009 and the statutory review of the Crimes (Domestic and Personal Violence) Act 2007. As the shadow Attorney General said, Labor supports the bill wit

Today I spoke in support of the Limitation Amendment (Child Abuse) Bill 2016 in the NSW Parliament. The Bill was introduced to ensure that there is no limitation period for an action for damages that relates to death of personal injury resulting from child abuse. I support the Limitation Amendment (Child Abuse) Bill 2016, but as a non-lawyer I will talk about a different aspect to those mentioned so far in this debate. After my first degree I undertook postgraduate studies in

My contribution to the debate on the closing of the railway line into Newcastle in which I describe the Government as doing everything it can to bully and bluster its way through this issue. I make special mention of Joan Dawson and Kim Cross of Save Our Rail who have agitated for the Government to be honest and clear with the community on this issue. As someone who has worked in transport and logistics for more than half of my working life I cannot believe the actions of thi

The speech I gave in support of the Independent Commission Against Corruption Amendment Bill. It is always good to see a government that is prepared to look for better ways to fight corruption and better ways to ensure that those who are corrupt are brought to account. I support the Independent Commission Against Corruption Amendment Bill 2015. All members of this House are aware of the terrible scourge of corruption and its impact on our State Government and our community—pe

I spoke on the Government’s Jobs for NSW Bill and pointed out that Maitland has the highest unemployment rate in the State and added that in preparing the Jobs for NSW Bill the Government sought advice from its mates in big business, without any input from the community, job skills networks, unions, the long-term unemployed or any other stakeholders. Since June this year my region of the Hunter, excluding Newcastle and Lake Macquarie, has had the highest unemployment rate in

My speech in which I say that although Labor can support a restructure of WorkCover, to take a number of independent bodies and remove their autonomy is going a step too far. We cannot stand for that. For example, we are completely opposed to the Dust Diseases Board being stripped of its independence and turned into a political wing of the Government I speak in debate on the Workers Compensation Amendment Bill 2015 and the cognate State Insurance and Care Governance Bill 2015

My speech in support of the Small Business Grants Bill. I point out this legislation must be a strategic element of an overall jobs vision. The Opposition wants to support good, visionary, strategic jobs outcomes. Government members talk regularly about job creation, but they do not talk about the unemployment figures in regional areas like Maitland. The speech of the member for Oatley reminds me of when I was the mother of an eight-week-old baby and a partner in a micro busi

My opposition to the sell off of the NSW electricity network. I oppose the Electricity Network Assets (Authorised Transactions) Bill 2015 and the cognate Electricity Retained Interest Corporations Bill 2015. I do so on behalf of the community in Maitland, which elected me to represent its views in this place. During the election campaign I promised my community that I would fight for Maitland to put it first. The former member for Maitland was a nice person, and she is still